Christian Chukuwuma Onoh, also recognised as CC Onoh, was birthed on April 27, 1927. He was a Nigerian successful entrepreneur and lawyer who died on May 5, 2009.  In 1983, at the close of the Nigerian Second Republic, he had become governor of Anambra State. He was also Emeka Ojukwu’s father-in-law. 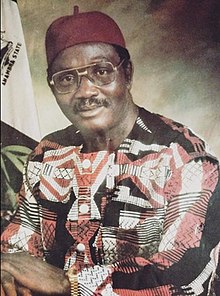 Onoh was born in Enugu Ngwo, a coal town in what is now Enugu State. His father passed away when he was eight years old, and his cousin Donald Oji raised him.  He went to school in the UK and got a law degree in 1957 from the University of Wales at Aberystwyth.

Starting from the late 1940s, he worked as a contractor, then as a produce inspector, and then as a livestock trader. He used the money from his businesses to sponsor himself in school.

In 1958, Onoh was chosen to be a representative for the Enugu Constituency in the House of Representatives. He later quit becoming the first person from Nigeria to lead the directors of the Nigerian Coal Corporation. He was on the commission of the Nigeria Railway Corporation from 1961 to 1966.

During the civil war, the Enugu Capital Territory was run by Onoh. In 1970, he went back to being a lumber merchant in his town. He was one of the people who started Club 13, which later became the Nigerian People’s Party (NPP). Later, he joined the National Party of Nigeria (NPN). He ran for governor of Anambra State on the NPN ticket in 1979, but he didn’t win. He was then made chairman of the Nigeria Mining Corporation and, in 1982, chairman of the Associated Ore Mines.

In October 1983, Onoh was appointed governor of Anambra State on the platform of the National Party of Nigeria (NPN). He beat the incumbent, Jim Nwobodo, who was running on the platform of the Nigerian Peoples Party (NPP) (NPP). There was a lot of violence, intimidation, and voting fraud during the election. The election was challenged, but in the end, the supreme court ruled in his favour. Three months after the fact, on December 31, 1983, General Muhammadu Buhari and the military took over. Onoh, and other civilian governors were impeached.

Onoh kept pushing for the Wawa people to have their state, and in 1991, General Ibrahim Babangida’s military government made that happen by making Enugu state. Anthony Aniogulu, who used to be a Supreme Court justice, said “Christian Onoh has always fought against wrongdoing and still does. But he would not mind employing inequitable methods to fight for justice.”

His daughter,  Josephine Onoh was born on April 2, 1959, and she died in a plane crash on November 28, 1983, in Enugu, Nigeria, while Nuzo Onoh, is a famous British writer and a pioneer of African horror.

His other daughter, Bianca Odumegwu-Ojukwu, was a beauty queen, a presidential adviser, and later Nigeria’s ambassador to the Kingdom of Spain. She is also remembered for her controversial relationship with and marriage to Chukwuemeka Odumegwu Ojukwu, the Ikemba of Nnewi and former president of Biafra, who was over thirty years older than her. In the early 1990s, their relationship was talked about all over the country.

Lilian Onoh, another daughter, is the ambassador of Nigeria to Namibia right now.

His son, Josef Onoh, also went into politics and became Chairman of the Finance and Appropriations Committee of the Enugu State House of Assembly. Josef Onoh also owns the popular, high-end hotel The Arriba (Voodoo Lounge) in Enugu and is a Special Advisor to the governor of Enugu State. He is the head of the Enugu Capital Territory Development Authority and wants to be the Peoples Democratic Party’s candidate for governor of Enugu State (PDP)

Onoh has nineteen grandchildren, including the daughter of Nigeria’s Foreign Affairs Minister, Geoffrey Onyeama, Candice Onyeama, who is a British producer, scriptwriter, and director who has won awards for her work, Christian C Onoh Jnr (111) Chineme Odumegwu-Ojukwu and Jija Carmen Orka-Goh.

All you needs to know about Bose Alao Omotoyosi Biography – Career , Marriage

This site uses Akismet to reduce spam. Learn how your comment data is processed.